Beautiful Desolation is an adventure point-and-click game by The Brotherhood released on 2/26/2020. This game instantly reminded me of Disco Elysium’s style, with deep conversations, investigative gameplay, and choices matter. After about 8 hours of playing, I have enjoyed my time in the game. Beautiful Desolation takes me back to my childhood. This is a good thing on one hand but has its drawbacks.

The gameplay in Beautiful Desolation is easy going, showing casual as the tag in the Steam store. Exploring the maps every corner is important, as hidden items are just that, until you are right on top of them, they can’t be seen. Quest items usually have a ping around them, but most everything else just has an eye when your character approaches within a few feet. The main objectives have you collecting items, traversing through dialogue to uncover the story, combining and delivering items, and a mini game or two.

I thought that the conversations needed fleshed out more. They mainly had three types of responses. You could be as peaceful and truthful as possible, angry or threatening, or lie about everything. Overall, they felt like they could have been a bit more interactive and given you more choices throughout the game. The conversations were not short, but you would choose an option then wait for three paragraphs of response.

There is no quest journal or any indication of the next steps to take, other than what is revealed in dialogue or item descriptions. This missing feature makes finding the current quest information tedious, but you can review previous conversations from your PDA to pick up new details. I didn’t find the story too difficult to follow, but there are a few extremely vague spots that could have clearer instructions (and even may, I just didn’t seek out the character with the rest of the information.)

There is also a battle coliseum, however, I haven’t accessed that content yet. Battle coins must be collected before you can try, and I’ve only gotten one so far. You can get these tokens by befriending different NPC’s throughout the game. I’m going to save this for endgame, since there is no other fighting, so I would like to collect as many tokens as I can find first. 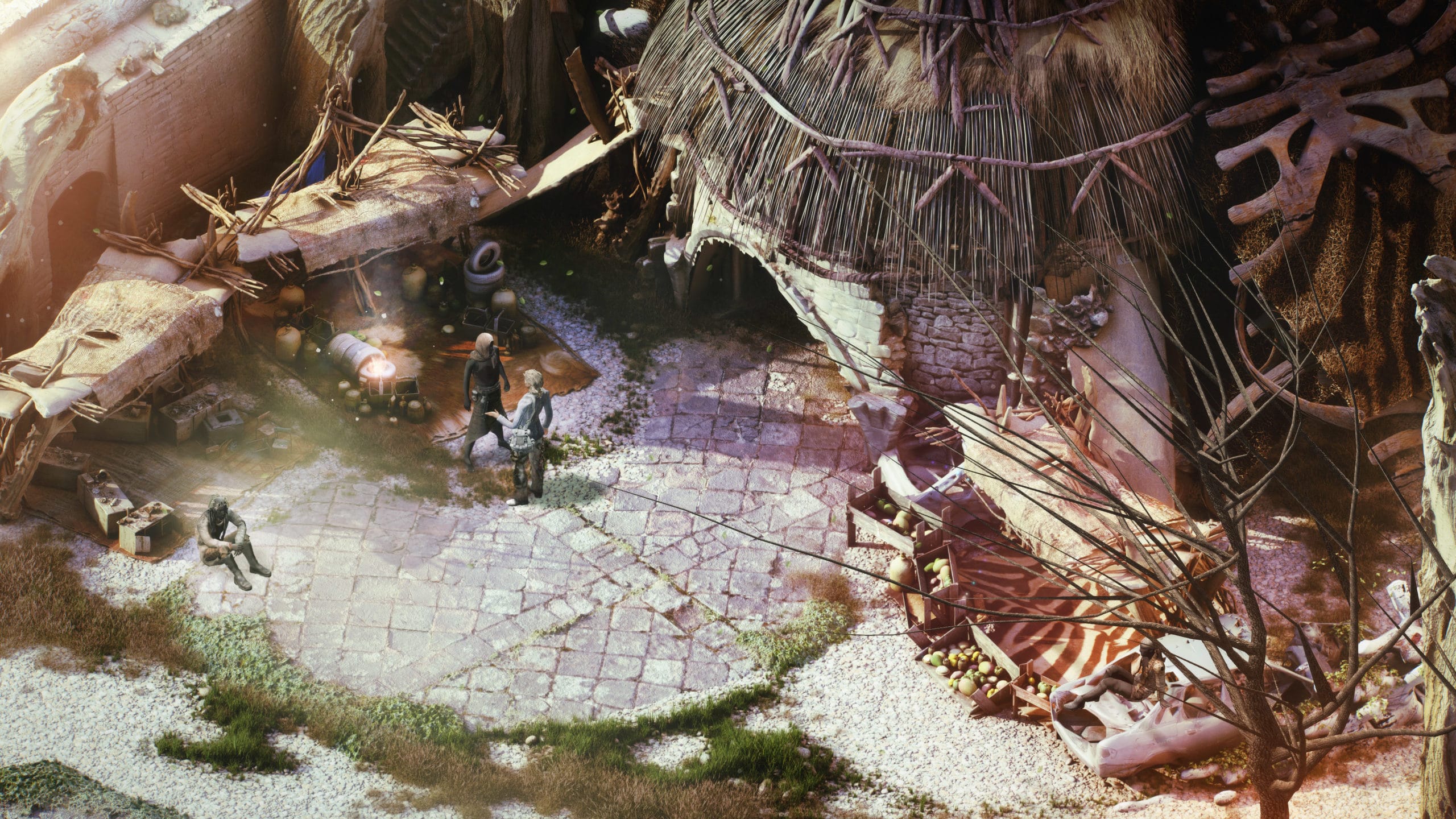 This is a point-and-click game. There is a little bit of an issue discerning where the walkable path is on some of the maps, so I tend to just click around the entire edge. You must be very close to most interactive objects to click them. You can also combine items in the inventory by drag and dropping. I didn’t have any issues with the controls other than a few design decisions.

The graphics are just so-so in Beautiful Desolation. I kind of expected more from the artwork here. It did have a very 1990’s feel to it, which was reminiscent of being a kid again. I didn’t have to type the commands at least. I said previously that the walkable paths are a bit difficult to see in places. I did like that most new areas that you visit come with a computer generated cut-scene of you ship, the Buffalo, arriving on site. The first two hours has a lot of scenes, but they cut off significantly around this point. I almost wish they had a little cut-scene with each major quest completed, showing the results in video form. Instead, you can visit sites and see the aftermath of your choices or talk to characters and see how they react to you.

Every character that you can talk to has a voice. This is creepy for some of the characters, and others the voices don’t quite fit the characters. I didn’t like the way that that the Grand Maw sounded. It was quite frankly pretty silly. She reminded me of Teenage Mutant Ninja Turtles, since it sounded like Krang talking. Overall, its effective to hear the story and the pain in the voices of some of the characters. The music is OK and the sound effects are appropriate. I wasn’t blown away by any of it, but I did like that everyone talked back.

I really wanted to fall in love with Beautiful Desolation, but it didn’t really go deep enough for my adoration to take hold. I enjoyed this game and the story line developed, there just isn’t much variation in gameplay throughout, nor much to keep the game feeling fresh all the way through. I recommend this to others on the premise that it did feel like a blast from the past, and I know that people that like to analyze and think about the story will enjoy it more than people that prefer having a little more direction. Besides my few minor complaints I feel that it is worth experiencing what the game has to offer. I’m assuming that there are a few possible endings since your choices are weighted in an item called Simulacrum when the game starts, so I’m at least going to try to go as a good guy, then a terrible tyrant to see two different possibilities. The game sets up nicely to have a bunch of different paths that could split the ending up dramatically. 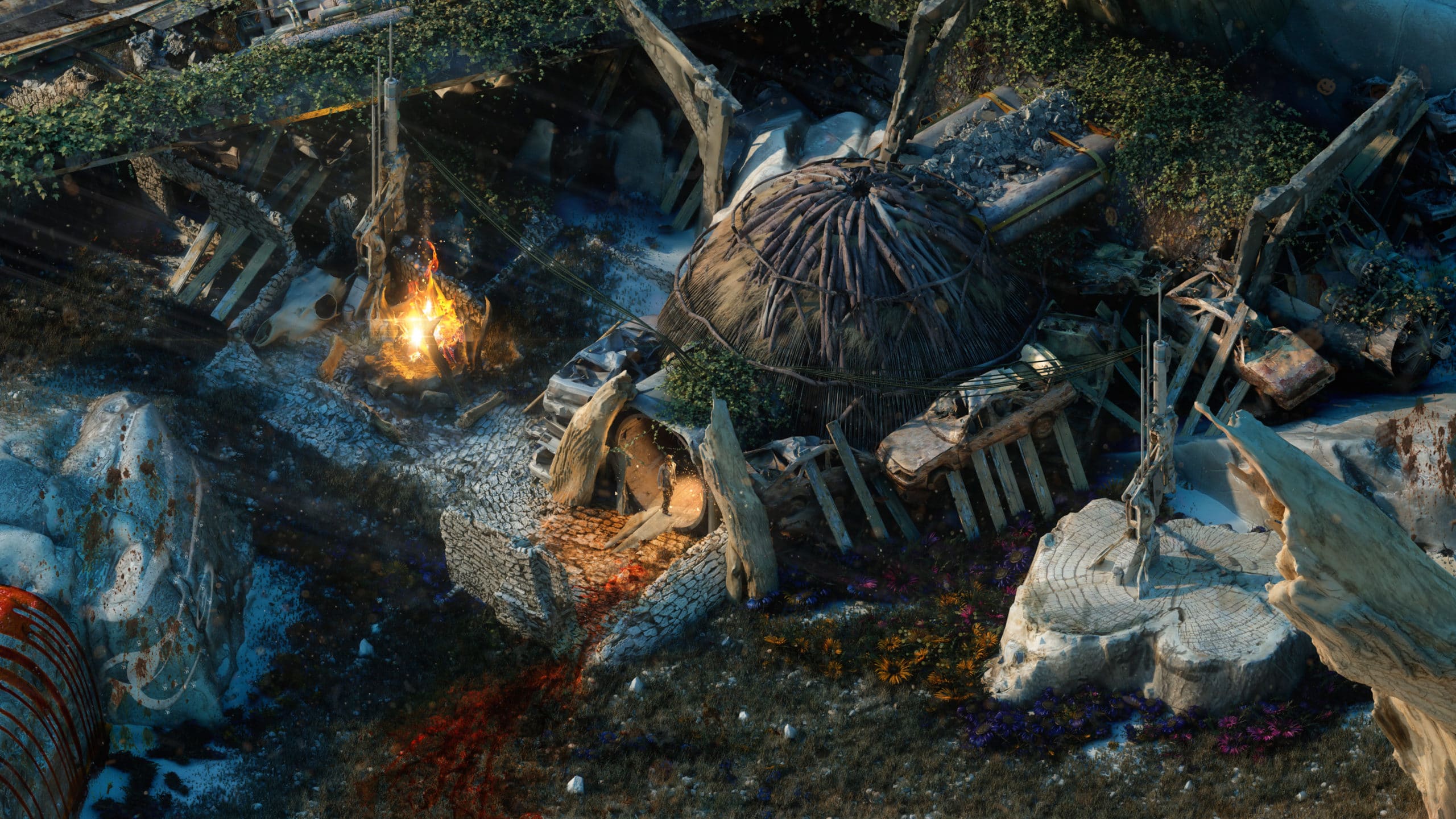 Problems are intuitive, never giving the answer directly, but rarely too difficult.

Voices for every character

No quest guide, journal, or indicator. Must pay attention to conversations

Running back and forth to complete quests gets monotonous

No new info indicator for Codex, must go through whole thing every time

Conversations are shallow, with 3 main responses, peaceful, angry, or lying

We use cookies to ensure that we give you the best experience on our website. If you continue to use this site we will assume that you are happy with it.OkPrivacy policy