Nioh, developed by Team Ninja and published by KOEI TECMO, was a Playstation 4 exclusive for almost an entire year. Nioh: Complete Edition finally came to Steam on November 7, 2017, and I finally got to play it.

Nioh tells the story of an English-Irish pirate named William who has a guardian spirit named Saoirse, who keeps him effectively invincible for as long as she exists, which offers an in-game reason why the game continues after William dies. William found himself in the employ of the English government collecting magical stones until he was no longer useful in their war against Spain, and then he found himself in the Tower of London where other pirates who served the Crown where being put to death in order to keep the Crown’s magical secret. An evil alchemist named Edward Kelley notices William and immediately detects Saoirse. Kelley is able to tear Saoirse from William and runs off to Japan to gather even more magical stones for the Crown, and Saoirse is going to be instrumental in detecting them. William, not taking Kelley’s shit, follows Kelley to Japan to reclaim his beloved spirit girlfriend.

After the tutorial level, Kelley winds up in Japan and the game really begins. Throughout the story, William will meet many characters familiar to players who know anything about the Sengoku era of Japan’s history. Even if you watch only a small amount of anime, some names will be familiar to you, like the famous ninja Hattori Hanzo. In this telling, Japan has been overrun by demons called yokai, and enemies in Nioh are either human or yokai. The distinction is important to make, since humans block and yokai don’t. Humans’ attacks can be interrupted, but yokai attacks will follow through even if you hit them. 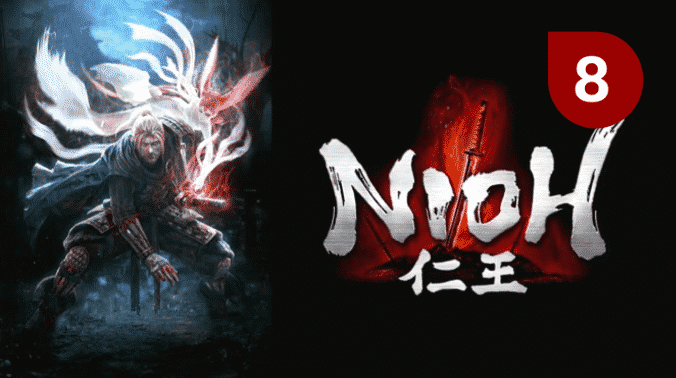 William has attacks that come from his weapons, and there are 7 main types ranging from a single katana to tonfas with which to strike down your enemies. Each weapon has a skill tree that unlocks new flashy moves and combo extensions, while some skills in a weapon’s tree are worth investing in because they improve your abilities no matter what you use. Not every skill in a tree will be equippable at once, so you will need to experiment and make choices based on what you prefer. Combat is ruled by how well you can control your stamina, or Ki as it is called in Nioh. After the end of an attack string, you can press a shoulder button (or any button on keyboard if you prefer) and instantly replenish a large portion of the Ki you just spent. This isn’t as complicated in practice as it is to explain. Ki is also depleted by blocking attacks. Human enemies follow the same rule, and their ability to block and attack is tied to a stamina bar that is visible above their heads. Yokai enemies enter a stunned state once their Ki is depleted, but they don’t ever block. Tracking an enemy’s stamina bar will become second nature as you progress through Nioh.

Nioh is a difficult game that pushes players to learn from their mistakes. I probably died to the most basic prison guard 20 times before the end of the tutorial level. However, this level serves as a primer to tell the player that they’ll need to play methodically and safely until they can learn enemy patterns to exploit. Death in Nioh means returning to the most recent shrine, or checkpoint, that you touched. Your currently accumulated experience is collectible on the ground where you died, and will remain there until you pick it up unless you have the misfortune of dying again before you can reclaim it. These shrines are where you can spend your experience and level up. The game is more difficult than someone might be used to, but if you pay attention to the environment and learn from your mistakes, you will be fine. There are more than enough tools available to the player that make any playstyle fun and rewarding.

In addition to your weapons, you can learn skills from the schools of ninjitsu or onmyo magic. Onmyo magic has useful active spells like sloth, which slows down an enemy, or weakness, which causes an enemy to take more damage than normal. Ninjitsu offers active skills like shurikens, which attack quickly from range, or landmines that spray the vicinity with paralyzing gas when stepped on. You will find many useful combinations for these types of skills in-game, like casting weakness on a flying boss before knocking him out of the air with shurikens before moving in to punish with your dual swords. If you can get a nasty enemy to chase you over a landmine that temporarily paralyzes them, you can get a lot of free damage in and turn the tide in your favor. Alternatively, you can prioritize more passive skills that increase your resistance to certain types of elemental damage and buff your damage output.

Nioh has bosses at the end of every story mission, and some of them can be mentally taxing. However, every one of them can be taken down without getting hit as long as you know the attack patterns. Obviously, this won’t be the case when you first face them, but before you smash your controller (or keyboard if you prefer), remember to slow down, look for openings in their attack animations, dodge like hell, and remember the number one rule: don’t get greedy. I’ve seen countless players get excited when we put a boss in a stun state and start wailing on them too haphazardly, only to find themselves dead as soon as the boss performs a wakeup attack. Nioh is a test of your patience and observational skills in this regard, since a single extra swing of the sword can determine life or death.

Co-op with another player is available on most of the side missions and every story mission except for the epilogue. This means that you can make a request for another player’s help by placing an ochoko cup (a very common drop) on a shrine. If you have a friend in mind, you can set a password. If the host dies, the summoned player is kicked back to their game menu. If the summoned player dies, the host continues the level alone. You can summon repeatedly if need be with no consequence. Many times, I’ve been summoned by a host and one of us died, only to get summoned by the same host moments later. There are emotes you can use to communicate, so make sure you’ve got “Hi-Five” on your emote hotbar to celebrate a tough success… right next to “Seppuku” in the event that you need to apologize dramatically.

Another option for cooperative play is called “Yokai Realm with a Companion”. In this mode, the two of you will start a level together, and there is a bar that diminishes each time one of you dies, but you can keep playing even with several deaths between you. Death in Nioh comes very suddenly, and often by silly mistakes like walking off of a cliff. This safety net means less interruptions when playing with a friend, but provides ample opportunity for the “head shake of disgust” emote.

If cooperative play isn’t your thing, there’s a multiplayer mode that pits you against other players in duels. This game mode isn’t very populated, which might mean coordinating with someone outside of the game to play in a timely manner. This mode suffers from some lag, with rollback favoring neither player. If a hit connects on your screen but not theirs, it happened. And vice versa. However, it can be extremely fun if your connection is strong enough and there are numerous in-game titles you can be awarded with for participating that you can choose to wear to your next fight.

Nioh is a fun and fair challenge from start to finish. It rewards experimentation with unlikely success and exploration with loot and collectibles. Enemies are varied and once you’ve mastered them alone, prepare to be attacked by several at once. Combat is fast and fluid, and the story is fun romp loosely based on historical elements from Japan. Levels are interesting to look around, and I’m sure you’ll have your favorites. Between tweaking special effects on weapons and gear, there is plenty for a min-maxer to keep busy with. Multiplayer is a blast and I’ve met several awesome people playing together. Have fun by yourself or with a companion through 5 difficulties and as many of the 999 floors of the end-game dungeon as you can handle! I recommend Nioh wholeheartedly.
8/10

-Lengthy story with tons of replayability and 5 difficulties + an end game abyss to conquer
-Wide variety of playstyles and gear are viable to access end-game content with
-Higher difficulties do not force you to replay every single mission to progress
-Redistributing every single one of your stats to try out another character build is cheap and easy to do
-Co-op is available on every level that gates your progress to the next story missions with the exception being the last level before the next difficulty.

-The jumps between difficulty modes can be extreme
-Accumulating too much gear for your inventory will happen often, so you’ll have to sell this extra gear for gold or experience points frequently which means time spent in menus
-RNG elements can make acquiring a specific piece of gear truly tasking for those seeking perfection
-Playing on PC has many users experiencing Crash-To-Desktop errors at random intervals, though there are several steps you can take and guides you can use to prevent most of them
-Helping other players on their first playthrough means that you will be watching several cutscenes repeatedly. Thankfully they don’t last longer than a minute in most cases

Please follow our reviewer`s at our Steam Curator page:
http://store.steampowered.com/curator/31367524/

Our link to Friend & Foe in discord is: https://discord.gg/32Hn7ZV
Steam group link: https://steamcommunity.com/groups/friendandfoe

Kurz
Coming soon. - Make money with Onono. It`s easy, just sign in. Write a review, article or post a video, pictures to earn royalty. The more followers you get and the more people you attract to your content, the more royalty you earn. - There will be a notice when the Onono Royalty program is up. - Founder of F&F and Onono. - Been connecting gamers since 3rd Dec 2017. - Also a dedicated survivalist in games.